← At Kailua Beach Park
Back on the Windward Side! →

The Eddie, a big-wave surfing invitational held by Quiksilver in memory of Eddie Aikau, took place last Thursday in Waimea Bay on the famed North Shore of O‘ahu. Eddie Aikau (1946 – 1978), the first lifeguard to be stationed on the North Shore, was renowned for saving lives (no reported losses during his watch) and surfing big waves. Since his disappearance at sea (paddling for help after the Hokule‘a — a voyaging canoe — had capsized), Eddie has occupied a vital place in Hawai‘i’s culture and history. The phrase “Eddie Would Go” can be found just about anywhere in the islands and is a testament to Eddie’s spirit of bravery and selflessness.

The event is rarely held (nine times since its inauguration in 1985) due to a set of requirements, including a minimum wave height of 30 feet along the face. The last invitational was in 2009 — talk about anticipation and built-up excitement. Last Thursday, twenty of the world’s most accomplished surfers were invited. Just to name a few: John John Florence, Kelly Slater, and Bruce Irons. Clyde Aikau, Eddie’s brother, reported that it was one of the best days he had seen in 40 years, and stated that this would be the final Eddie he would participate in, before retiring at 66 years old.

In total, 25,000 people raced to Waimea Bay (many camped out overnight), and those who could not make it were streaming the competition live online (some from their cubicles at work — slowing internet service across the island) or watching one of the many news feeds covering the event. Like everyone else, I could not possibly miss the Eddie and was not about to arrive without the right sketching materials. I went prepared with all the supplies I could muster and a pair of binoculars, in case I could not get close enough to see well. Arriving at Waimea Bay in the early morning, I walked from the nearest parking spot over three miles away and fought my way through the masses to a decent cliff-side spot from which I could see some of the action. Below are my sketches of world-class surfers riding waves upwards of 50 feet tall, the excited crowds, and the support teams maintaining a safe event. Incredible! 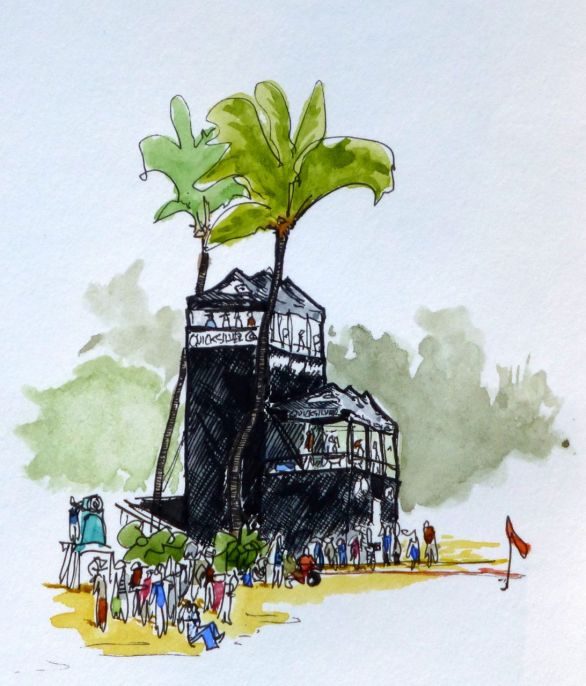 3 Comments on “The Eddie”