Last Saturday we (AJ, Harald, and I) attended the American Institute of Architect’s (AIA) Architecture Walking Tour “Downtown Honolulu – 20th Century Architectural Styles”. Although AIA regularly offers tours throughout the year this one was only offered once in 2015 as part of Architecture Month.

For two hours I learned about the history and styles of buildings in the business district – a place I have spent little time in and have not cared for much before. By the end of the tour I no longer saw downtown as just a jumble of high-rises. Each building has its own story. For example, the No.1 Capitol District Building was originally the site of the first Royal Hawaiian Hotel commissioned under King Kamehameha V and opened in 1872 to host foreign dignitaries and friends of the royal family. The hotel was then converted to a YMCA in 1917 and used by the military in World War I and II. In 1926, while in military use, the hotel was demolished and a Spanish mission revival style building was erected which has housed the Hawaii State Art Museum since 2000.  An art museum in Honolulu that I was aware of, but had not been to. Will have to pay it a visit soon… It is located on the aptly-named South Hotel Street. 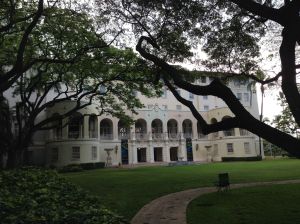 The final historically significant structure we visited was the Aloha Tower. Built in 1926 it originally served as a lighthouse but was decommissioned in the late 1960s and is now being revitalized by Hawaii Pacific University. The view from the observation deck is outstanding. In order not to be in the way (and view) of other visitors to the deck, we decided to sketch the tower and its surroundings from the marketplace. 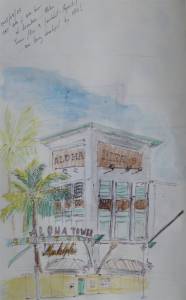 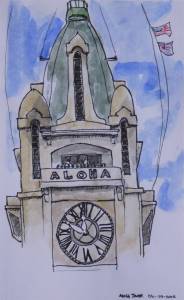 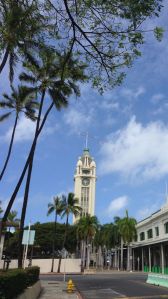