I am currently taking a geology lab course at the University of Hawai‘i at Mānoa. Last Wednesday, our class walked around campus to identify different rocks using the knowledge that we had accumulated so far… and the occasional guidance of our instructor. :) I really enjoyed the tour, so at the end of the week I decided to spend more time on campus to sketch several of the rocks we looked at. I became so engrossed in the scenes that I ended up sketching for 3 hours.

I first sketched the Pacific Ocean Sciences and Technology Building where I have my class. 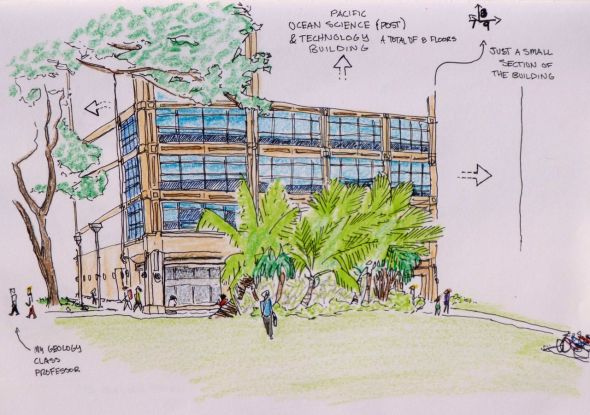 Then I went to the Hawaii Peace Memorial near Kennedy Theatre, which seems to be made of Granodiorite, an intrusive igneous rock (solidifies from magma). 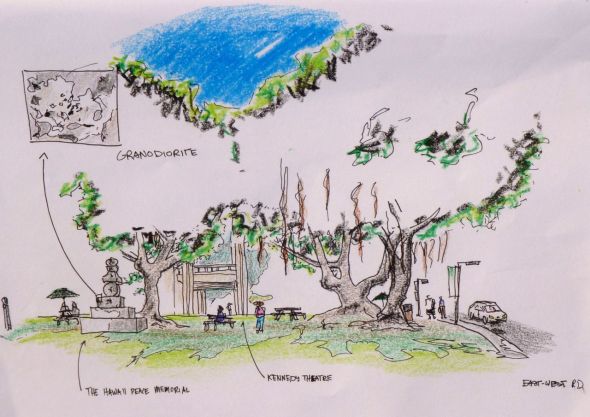 My last stop was the Campus Center. At the Campus Drive entrance, there is a sculpture called Hina-O Na Lani (Mother of the Universe). The figure and its base are both made of popular rocks used for kitchen countertops: Granite and Anorthosite. The courtyard of the Campus Center is tiled with fairly smooth and flat rocks which, unlike the others I mentioned, are metamorphic (unmelted rock transformed by high temperature and pressure) – possibly Phyllite. Anyway, I’m getting carried away talking about rocks and what I’ve been learning! 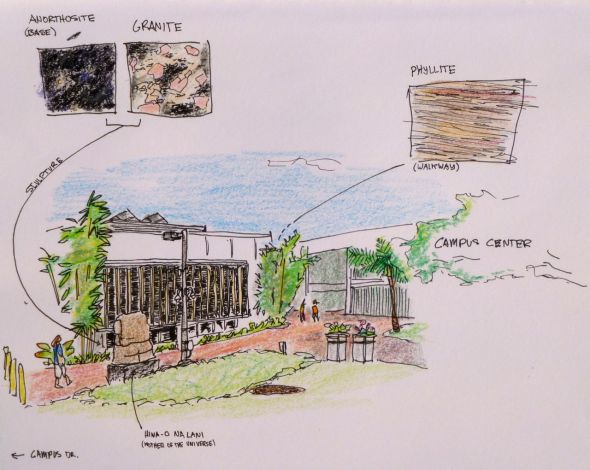 I am unexpectedly pleased with the close-up sketches of the minerals in the rock… and would even say that they look better than the rest of the sketch. Crayon turned out to be an excellent choice of medium because of its waxy and gritty look. The colors of the minerals were great to see, and definitely something new to sketch.

I hope to sketch more of campus in the future, whether that is on my own or during an Urban Sketchers O‘ahu event!

Our chapter held a sketch event this Sunday morning at Ala Moana Shopping Center. It was good to see a few returning sketchers, as well as newcomer Mayumi. The weather was great – occasionally overcast and breezy. From the top level of the parking garage we had a view of the shopping center in front of Ala Moana Beach and downtown Honolulu with the Ko’olau Range as a backdrop. Although chosen for just that reason, our location proved almost overwhelming due to the plethora and detail of targets. It was a challenge not only to pick a scene, but also to distill it while truthfully depicting the subject. This is a location with so much potential that we will have to return someday.

We jumped in at 9:30 and were yet again surprised by how quickly 11:00 arrived – time for show-and-tell. Pencil, pen, watercolor, crayon, and watercolor pencils all made an appearance. Given the similar subjects we chose (e.g., cranes, the shopping mall with scaffolding, and downtown Honolulu), it was interesting to see how differently the challenges of perspective, depth, and contrast were tackled. I came away with a greater interest in crosshatching and a desire to explore the technique more in my own sketches. 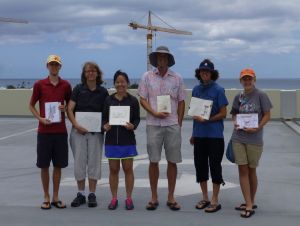 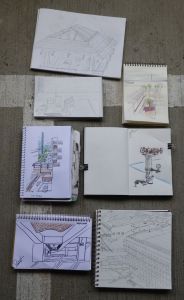 Hope to see everyone at our next event!

AJ: For many months I’ve been walking by a particular construction site daily. What started as a house remodel now seems like a complete rebuild except for part of the carport and a rain gutter! Several roll-off containers have been filled with demolished parts of the house and then carted away to the landfill. Since the project is nearing completion, I wanted to attempt a sketch of the dumpster before it is permanently removed from the site. 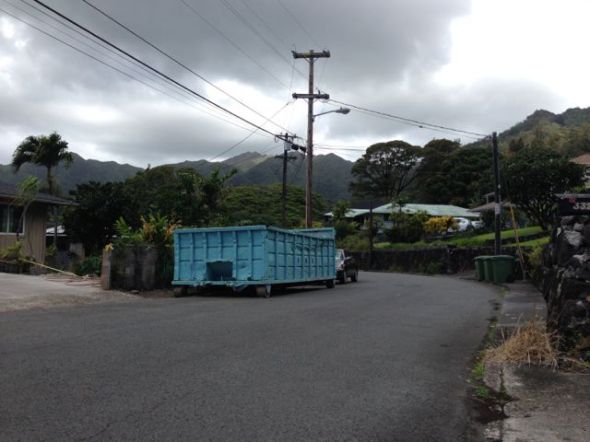 Similar to my last sketch session, I decided to begin with a sloppy “planning sketch” to see what would be most problematic … as well as to give myself an added chance to get the perspective in better shape the second time around. I also wanted to test the color palette available to me as I only had four crayons (yellow, red, green, blue) and my usual black TÜL pen. I almost ended my session with just the blue dumpster pictured … and nothing else … but I remembered my improvement goal from last session. That was to practise including background (and foreground) details to anchor the target item in its setting … and on the page. I plan to keep focusing on that goal in the future.

In all, it was a fun morning and I was pleased that the rain stayed away long enough for me to put something on paper! 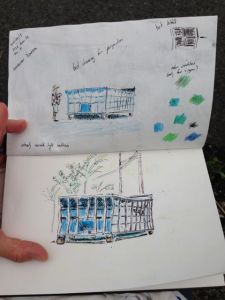 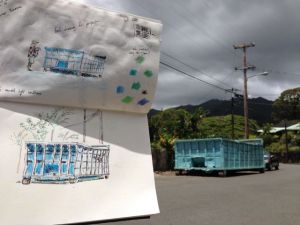 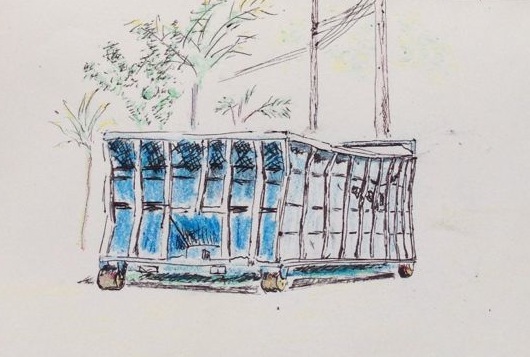 Harald: I confess to being a dumpster diver at heart. Not of trash cans, mind you, but construction-site roll-off containers. Largish pieces of discarded dimensional lumber are always attractive, and occasionally one finds treasures in the form of hardwood flooring, brand-new pipes, and more. But I digress…

The container I chose to sketch today is one I know well. As the construction is wrapping up, the container is seeing only light use, filling up slowly, mostly with cardboard and small chunks of wood. 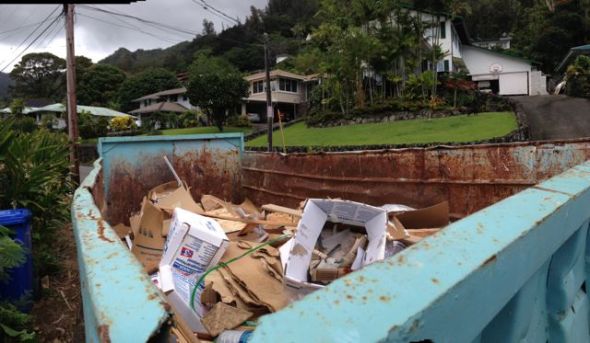 Sketching the interior of this rusty and rather banged-up specimen proved to be too much of a challenge for my still budding watercolor skills. Yet again I succumbed to the temptation of going after the details too soon (or at all), rather than using light colors on large areas first and then building depth and contrast selectively and deliberately. Argh. 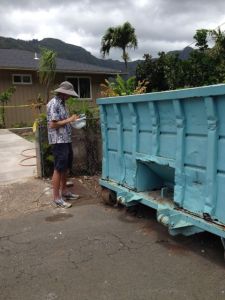 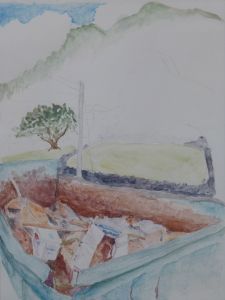 It was fun though (in a mildly masochistic sense) to realize my mistakes as I made them and to attempt to rescue at least some of my sketch. Needless to say, the whole operation took far too long, forcing me to abandon much of the background. Lesson for next time: bring brushes of different size, focus on water management, clean “palette” every now and then.

Sebastian: Although work on the house was largely complete, there were still indications of an active construction site. A portable toilet and pile of lumber were among some of the signs. This time, I decided to use one medium (pencil) and move away from my standard pen-watercolor combination.

Once again, we had unique interactions with passersby. Most notably, we were asked a new question: “Are you guys OK?”, which diverged from the usual “What’s going on?” or “Is this a school project?”. It was a nice morning to be out sketching.

Next, I may do a series of portable toilets (as shown) or older cars, since there are a few to be found in the neighborhood. 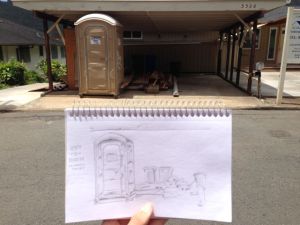 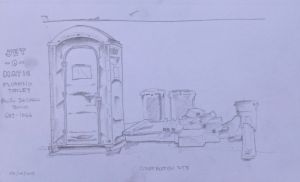